Tyler was home last week; spring break. He has been able to start running again, building back up from the stress fracture he sustained after the half marathon. He found a program online from the Pfitzinger Lab Report. I've bookmarked it myself for future reference.

Although not strictly on the plan, he took advantage of the terrific spring weather and headed over to Bonelli for a 3.5 mile jaunt and brought his camera along. 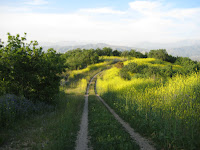 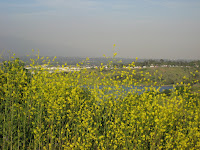 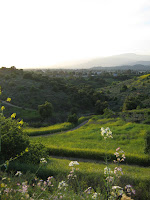 I haven't run a step since the last run of the WTRS. Total mileage for March 2008 was an all time record low of 26.7 miles. A coworker made the observation that maybe this is what happens when you break your self imposed moratorium on California marathons for Catalina and Big Sur.
I've kept myself busy with home improvement projects. The hedge around the backyard is completely trimmed from one end to other for the first time since we moved into this house in 2000. We've painted our bedroom (twice) and installed, trimmed and painted 4 new interior doors. I've got three more to do and a bathroom remodel scheduled.
Run and race well and put in a couple of miles for me.
Posted by Darrell at 6:56 PM 11 comments:

I've considered several posts about the situation I find myself in but haven't quite figured out how or what I really want to say. This email string pretty much tells the story in far less words than any post I've composed in my head.

Did you get to run Catalina? How are your legs? We hope you will heal in time for the Big Sur. When is your next state marathon? Be sure to put April 19th on your calendar for the Big Sur get together.

I've definitely put the 19th on the calendar.

I did not run Catalina. The docs think I probably have a stress fracture. X-rays are inconclusive but there is a tell tale pain on the bone. Everyone recommended against Catalina so I finally listened. Big Sur looks doubtful at this point as well. It is only 6 weeks away. If I take 6 weeks off there is no way I'll be ready for a marathon. I may not even be ready for a leg of the relay, which I may consider if there was an opening. We'll be going anyway since Tyler is running one of the relay legs.

No states are planned this year yet, except for possibly Tennessee in December. I've got to let the leg heal up completely if I have any hope of running 38 more states someday.

WTRS Comes to an End

Here it is almost time for another weekend, and I'm finally getting around to posting about the last race in the Winter Trail Run Series. This time out it was 21K on completely new trails from the rest of the series. The maps and Garmins show 12.7 miles but I guess a 20.4K doesn't have quite the same ring.

What a beautiful weather day it was. We we so lucky throughout this whole series with the weather. It often rained the whole week before and even within hours after finishing but never on the race. I was kind of in a whiny mood at the start. I was cold (it wasn't really), I was tired (I hadn't slept well the night before) and my leg (the right one with the calf/shin issue) wasn't feeling too good. My bib number was 250. I hoped that that wasn't going to be my finish time.

We headed off down the road and it seemed like just about everybody took off ahead of me. I was taking it as easy as I could to assure a finish with the bum leg. As we chugged up the first climb up Main Divide, there were more than a few of us walking. The RD had counseled us to walk this and save our energies for later. We'd need it. I knew what was in store but I'm not sure how many others really did. Going up hill doesn't bother the leg.

After the aid station we headed down the Trabuco Trail, 1400 feet down. It was an amazing beautiful and fun trail to run down. The leg held up but I felt each step going down. I slowed to almost a walk on the steeper parts. There were some really rocky sections that made footing a bit of an issue.

Once we hit the bottom we headed UP and I do mean UP, Horsethief Trail, back up 1300 feet of the 1400 we'd just come down except up in 1.5 miles instead of the 2.5 miles down. I'd run this section before. There wasn't much running, but I did pass a couple of people even walking UP. As we approach the peak the trail takes on a different look, more sandy with ironwood brush. I was very happy to see this area knowing that the hardest part was over.

This time went we hit the summit we headed right on Main Divide back toward the aid station and ultimately down the hill again back to that starting line. Going down that hill was one of the toughest runs ever. My leg was throbbing with each downward step. I've never been a good downhill runner and on this particular day my downhill run was probably slower than my uphill walk. The last quarter of a mile or so was on a flat trail, except for the fallen tree we had to climb over.

My final time was 2:45:46, longer than the Boney Mountain Half in January by 10 minutes or so. I'm not sure which course is tougher, neither is easy, but I was happy to have completed the whole Winter Trail Series. This has been on my running radar for awhile. I wouldn't mind adding this as an annual event on the race calendar. You can't really beat a winter race where you can where a sleeveless shirt and get a head start on your summer tan!

This post has gone on long enough, so the current state of the leg "injury" will have to wait for another post. Sorry.
Posted by Darrell at 8:51 PM 9 comments:

This post has been a long time comin'. Finally, the answer to where's Darrell going to run his next marathon? What state is he going to conquer next?

I'd like to thank the bloggers that have invited me out to their state in 2008. David in Florida, Wes in Georgia and Rae in Tennessee. I have to give special mention to Neese, fellow ex-Ohioan, who volunteered to send my wife emails to get me to come to South Carolina. All places I'd love to go and people I'd like to meet (or see again in Wes' case).

My running group, the CA Cruisers, have been planning a yearly destination race. 2005 - Chicago, 2006 - St. George, UT, 2007 - Washington DC. In 2008 they've decided that the destination is the Big Sur Marathon. What was I going to do? I've had a moratorium on California marathons in favor of the state goal, but there was no way I was going to miss out on Donald's favorite marathon. Donald has done such a great job talking up this marathon, I knew it was only a matter of time before I'd run it.

I had originally committed to running my first ultra in CA this winter as well. When that didn't pan out I decided to go all the way with the California exceptions in 2008 and added another race from my wish list. With any luck I will be running the Catalina Marathon next weekend. I've hinted at running the inaugural Big Bear marathon in the fall as long as I've gone and broken the No CA Marathons Rule.

The big factor now is the state of my right calf. The knot/pain gets better during the week when I only do the bike at the gym but then flares back up in a big way after my longish runs on the weekend. The pain started about the time I started the WTRS wearing my trail shoes. I'm slated to run race #4 of the series this weekend and I'm going to wear my street shoes.

I do have an appointment Friday afternoon at a sports medicine/physical therapy clinic that comes highly regarded by a couple of my Cruiser running pals. After Catalina I can take some time off but I've only got 6 weeks after that before Big Sur. I don't expect much from either race in terms of times but I do hope to cross the finish lines having enjoyed the routes and with a smile on my face.

As far as other states in 2008, I only have tentative plans to meet Joe in Tennessee at the Memphis Marathon for what will become our 3rd Annual Early December Blogger Reunion Marathon. All are welcome to join us.

So, there it is, finally - my 2008 marathon plans assuming I can rehab the leg properly:

The weather all week had been very decidedly spring-like. I hadn't had a chance to run with my Cruiser buds for a while. This week's email plans included the line "It looks like we can put aside the rain gear for this week end and pick up the sunscreen instead." I was also excited about running with them since they planned on running into Chino Hills State Park. Trails - woo hoo!

Much to my surprise I awoke to a cloudy, misty morning. I checked the weather on-line and the forecast called for highs in the 70's and 10% chance of precipitation. Since the run was 30 miles from home I went out the door dressed for the sunnier weather predicted. Alas I arrived in Yorba Linda to the same gloomy, wet conditions.

The run included 2 miles on streets to get into the park. The street was Fairmont and the direction was UP. What a way to start the run, I hadn't expected that (but the downhill finish was sure going to be appreciated).

We regrouped when we hit the entrance to the park. I fell in with Denis for the loop through the park. He had just recently returned from running a marathon in Tahiti. I think that is pretty cool. This was also his first time running in Chino State Park. I think he really enjoyed it. The low clouds and mist persisted throughout the run, making visibility with glasses difficult. It even rained a little at one point, not exactly the weather I expected, but really good for running none the less.

The loop on Southridge, down Diemer, Telegraph Canyon and back up Little Canyon trail was 5 miles. Add this to the road section and the whole run would have been 9 miles. I was really hoping for more. When Dennis and I reached the exit there were some of the faster runners waiting for us. Among them was Julie, my MCM partner and current WTRS buddy.

I looked at her an told her I was thinking about making another loop around. She just looked at me and then said "You're not kidding are you? Do you need the miles?" No, I wasn't kidding and I kind of hoped she'd be interested in going around with me. As far as needing the miles, I don't know, but I did WANT the miles. Julie wasn't biting so I ran the loop alone for a total of 14 miles.

My total mileage in February was a paltry 83.1 even with the added extra bonus leap day. It is likely to be on the low side for the near future.
Posted by Darrell at 6:57 AM 9 comments: