One half of the Crazy Gym Rats 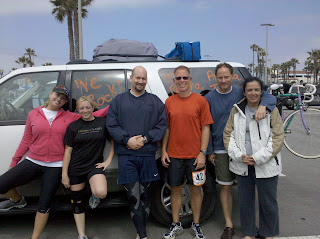 After we finished our last leg. All we had to do was wait for Van 2 to run to the finish line. Our final time was somewhere around 31 hours. Good fun! ! 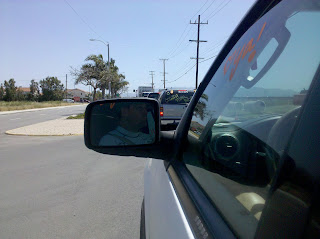 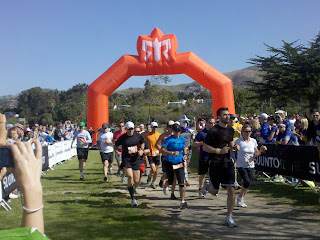 Posted by Darrell at 9:53 AM No comments:

I mention often running with the California Cruisers. We get several weekly emails announcing the next weeks run location, pictures from the the last run and news of upcoming races and results afterward. We get together for races everywhere and have a party or two now and again.

Today I received an email from our fearless leaders, John and Dorothy, with the story of the beginning of our little group.

"Our first organizational meeting was on April 18, 2005. Fresh from our 2005 LA Marathon (training with A Snail’s Pace), we decided to stick together and venture forth for new adventures. We decided to run the Chicago Marathon and Margaret discovered that if we ran as a team we could get entry into a VIP tent at the start/finish line. We had enough runners for three teams and we needed a name. So after considering all suggestions, we settled on California Cruisers. We had three teams, so we were California Cruisers 1, 2, and 3. Kitty took charge of getting a shirt design and we had shirts printed up by Sonia. To train for the Chicago Marathon we each took a week end and came up with a course to run.

So we began our adventures. Some runners brought along family members and what a great time we had in Chicago! Since then we have grown to a very sizable group and continue to have memorable adventures. We are a great team!"

Below I included some of the pictures that came with the email. Photo credit goes to John, although he is in most of the pictures, he is definitely our historian. 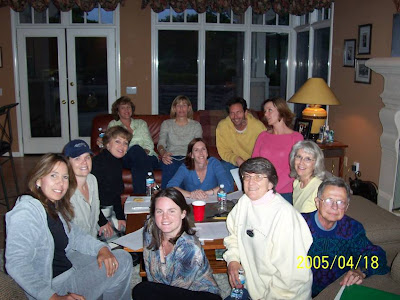 The group at the planning meeting five years ago. (Thank goodness for date stamped digital photos) 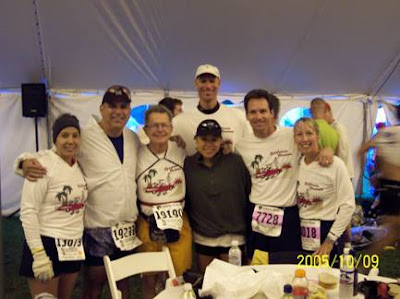 some of the group in the heated VIP tent at Chicago. 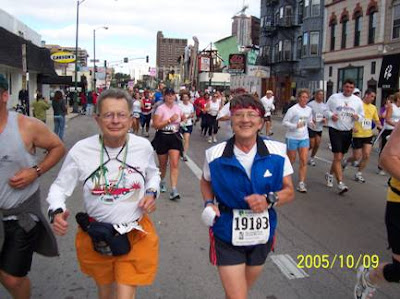 Our fearless leaders John and Dorothy somewhere on the streets of Chicago. 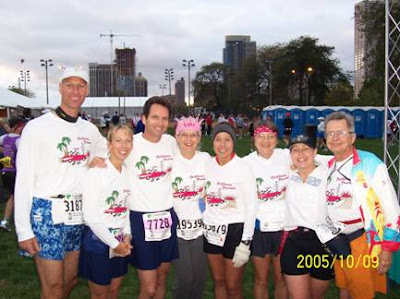 Part of the group before the race started. Gotta love the port-o-potties in the background. What else would there be at a marathon starting line?
This was all back in 2005. I hadn't joined the California Cruisers on this particular race because I had been accepted into the NYC marathon lottery. NYC is run just 4 weeks after Chicago and back then I didn't think I could run two marathons in a 4 week span. This was also before I had a blog. NYC was my 6th marathon and 4th state.
As it would happen John and Dorothy and a few others had registered to run the Las Vegas Marathon the first weekend in December 2005. A room became available so I nabbed it signed up and ran the Las Vegas Marathon just 4 weeks after having run the NYC Marathon, proving that you don't know what you can do until you try. This little blog was started soon after New York. Las Vegas earned me Nevada as my fifth state thus the origin of the url - www.fivedown.blogspot.com. I've since run 20 marathons and added 16 states and the Distric of Columbia to my 50 state list.
Our little group has grown over the years, adding members almost weekly at times. The email list is quite long. (We grown so much that John has even added a disclaimer about injury, etc and the bottom of the emails. Runners tend to be a responsible bunch, but I guess you can never be too careful.)
Now five years later I'm still running many of my long weekend runs with the California Cruisers. We've been to lots of great locations, run many miles and races and created long lasting friendships. There's not much more you could ask for out of a running group.
Posted by Darrell at 6:31 PM 6 comments: