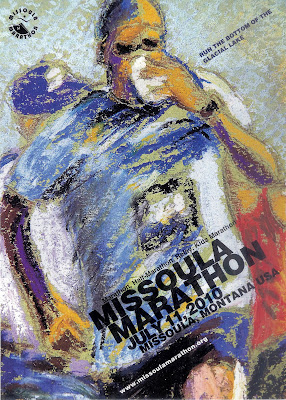 This ad appeared in Runner's World in January or February. It caught my attention right away. I loved the colors and the chalk art. What really got my attention was the race date - July 11, 2010 - my birthday. What a better way to celebrate my birthday than running a marathon. I'd run a half in Napa several years ago and a marathon in Bellevue, Washington on the weekend of my birthday in 2006. I was intrigued. The same issue of Runner's World also had a review of the Missoula Marathon. It was very highly regarded winning "Best Overall Marathon" of 2009 by Runner's World readers. There were many kudos on the race on marathonguide.com as well. A fellow CA Cruiser had run the race in 2009 and had only good things to say about it.

I registered early, bought plane tickets, secured a hotel room and even recruited another 50 state hopeful from the Cruisers to join me. Since the race is a small one, I had contacted the race staff and they'd agreed to give me bib number 49 in recognition of spending my 49th birthday at the Missoula Marathon.

I registered by mail and somehow neglected to fill out the amount on the check, although I'd managed to sign it. The race staff had a bit of fun with me by filling in the check amount for $275,000 and thanking me for purchasing the marathon and hoping I enjoyed by birthday. After a couple of frantic phone calls trying to assure myself that they were just kidding, I couldn't wait to actually make the trip to Missoula and to meet these people. They had a little fun at my expense, but good fun, my kind of folks.

But then disaster struck. Well not quite disaster, but the big project I was working on at work required me to take a two week trip to Europe to obtain customer feedback. The trip had to be scheduled in July, the first two weeks, before all the Europeans take off for their summer holidays. Just like that my hopes of adding the Missoula Marathon as State #17 were put on hold. At first I was reluctant to go on the work trip, I really would have rather run the marathon. But I finally came to terms with the trip and thoroughly enjoyed my two week stay in Europe on the companies dime. I was able to get some very much needed feedback on a new product idea and to see a part of the world I'd never had the opportunity to see before. And the best part is I got in some really fun runs while I was there.

In Paris I found my way to the Tour Eiffel and the River Seine one morning while in Paris. In Germany I got to run several days in the wonderful NaturPark Nordlicher Teutoburger Wald in Bad Essen. In London I had an afternoon where I got to explore Green Park, Hyde Park and Kensington Park and a shorter run on morning around St. James Park. In Madrid I was able to go for a run in the Parque del Retiro. It turned out to be not such a bad exchange for missing Missoula.

I'm planning on trying to run it in 2011 and although it won't be on my actual birthday it will be my birthday weekend. As a bonus a couple of the other 50 state crazies in my running group are hoping to join me.

For now I'm on track to make the Twin Cities Marathon on October 3, 2010 the official reason to change the blog header/name yet again to Seventeen Down. But then again you never know where work might send me in the fall......
Posted by Darrell at 10:13 PM 9 comments: