Nine weeks since I last took a single step running. I'm still healing from the stress fracture to my right tibia. I have my good days and bad days. I haven't blogged not because I haven't wanted to, but because I just haven't found the time. I honestly sometimes can't figure out how I ever found time to run in the first place. Life has been so busy. I really do miss keeping up with all the super people I've met through blogging and running. I think the fact that I've unintentionally cut my ties with you all bums me out even more than not running has. I dislike being a fair weather friend, but I am afraid that that is the way it goes.

So what have I missed:
Catalina Marathon, March 15, 2008 - DNS
Big Sur Marathon, April 27, 2008 - DNS
This weekend I missed the Malibu Creek Trail Challenge, a race I've run twice before in 2005 and 2007. So to keep the odd year thing going, I guess missing it this year isn't so bad.
I'm super bummed that I will have to sit out the Fontana Days Half Marathon this year as well. I've run it three years straight and had intended on keeping my streak alive. Back in December I had hoped to run Rock and Roll San Diego with my oldest son, but stress fractures for both of us have necessitated a reschedule.

The good:
I was released by the doctor that diagnosed the stress fracture to begin physical therapy. He also equipped me with a pair of orthotics on May 1. Working with the physical therapist has been very good. The pain in my tibia has subsided considerably. I've found out just how weak I truly am when it comes to some basic motions. All the work with him should set me up well for a great come back eventually. The original doc says I can start walking longer distances with the orthotics and left it up to the PT to release me to run. We haven’t set a firm date, but I’m really hoping to be running again by June 1. I've been going to the gym and riding the stationary bike up to 40 minutes at a time and I’ve been working with my personal trainer twice a week including a leg workout every other time with him. I've been getting in some exercise but nothing really replaces the feeling of being out on the streets and trails under your own power. All in due time, I suppose. 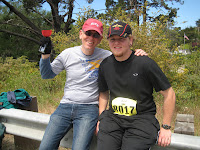 I did get to go to Big Sur to support my running group and my son, who ran a leg of the marathon relay. He had leg 2 and decided to run leg 3 up and over Hurricane Point as well. I had a good time shouting and ringing a cow bell near the finish line. A highlight of the trip was dinner with Michelle, Eric, Dori and Donald.

The one thing that has been keeping me insanely busy lately, is a complete bathroom remodel. We had someone replace the pink 1958 bath tub for a new white model and will have someone else install new can lights and a separate switch for the fan, but the rest has fallen on me with help from my wife. I've spent the last several weekends from sun up to sun down installing backer board and tiling the tub enclosure. The garage is full of tile for the floor, new cabinets, a new toilet, lights, towel bars, etc. I've got to finish before June 3 when relatives start arriving from out of state for our youngest son's high school graduation. From this perspective, not running is a good thing.

I took some time today to make lunch for my wife and mother-in-law for Mother's Day. I made Pasta Puttenesca with shrimp and scallops (with an extra one of chicken for my son and sister-in-law). Salad and warm bread rounded out the meal. Then I made a lemon bundt cake and mixed berry sauce with vanilla ice cream for desert. It was all pretty darn good, if I say so myself.

The future:
It looks more and more like my only marathon this year might be Memphis in Tennessee with Joe and whoever else decides to join us. I'm really hoping to re-enter the running scene by taking part in the Surf City 5K on July 4. This was the first race I ever did back in 2003 when I started running. It seems like a fitting return. I won't be fast but I should be able to cover the distance by then.

In the meantime, thanks for hanging with me and accept my apologies for not stopping by more often. I've missed you.
Posted by Darrell at 7:20 PM 20 comments: