I did this event last year and had an absolute blast, so when the CA Cruisers jumped on the band wagon I was in with both feet. So many things were similar to last year but some things were completely different.

The race started with our official start in Huntington Beach at 7:15. The route took our first 6 runners up the Santa Ana River Trail that I've run countless times in training. After Van 1 ran 22 miles Van 2 started the day at around 1:00 in the dirt parking lot that served as my home base for many Saturday long runs for my first few marathons.

My first leg, Leg 7, was 7.3 Miles Hard continuing on the Santa Ana River Trail. I had opted not to take water with me since the distance was less than 10 miles. But the temperature was 85 degrees and 0% humidity running into a dry breeze. I started off the first mile at 8:54 and the next couple ticked off in the low 9:00, but with the heat I just couldn't sustain it. It seems pathetic now after reading in last years post that I ran a similar distance and time of the day last year for an 8:30 pace. It was just so hot and my legs just ain't what they were a year ago. (As a side note, I really need to figure that out.)

The day only continued to get hotter, reaching 95 for some of the runs before the sun finally set. Every runner’s times were suffering. We finished up our 6 legs 39.2 miles later in Lake Elsinore before sundown. One of our runners suffered heat exhaustion and nearly passed out after her leg. I've never seen some one so devoid of color. After some ice, water and a bit of food she came back to life and was able to run her other two legs later the next day.

We ate dinner at the Exchange Point and then headed off to a hotel for showers and a brief nap. I slept for about 2 hours, waking up at midnight to leave for Exchange Point 18.

I took over from Jean at about 2:00 a.m. after about a total of 96 miles. Leg 19 was 8.2 Miles Very Hard with 1000 ft of elevation gain but also a nice downhill section of about 600 feet. This run was so enjoyable. It is fun to see the bobbing blinking tail lights strung out in the distance ahead of me. The temperatures were considerably cooler at 50 degrees, just right for running. I felt really good on this leg and was able to run the entire distance including the hill. My pace was still a relatively pedestrian 10:36 (8.2 miles in 1:27).

We finished our next five legs, about 28.8 miles total about 6:30 in the morning. Van 1 was on their way trying to complete their last round of legs. By now we had fallen nearly 2 hours behind our projected finish time of 5:30 p.m. Our van headed out the breakfast and then went straight to Exchange Point 30 to wait for the arrival of Van 1. Exchange 30 was at the Torrey Pines Glider Park. There was plenty of room to park and spread out but no shade what so ever and the day was warming quickly. We hung out until nearly 2:00 in the afternoon before I took off once again.

My third and final leg, Leg 31, was the longest yet and longest of the race at 9.7 Miles Very Hard along the bluffs of La Jolla. It was a spectacular view. The temperature was nearing the 80's but there was a nice ocean breeze. I chugged along the paths and streets of La Jolla and evened managed to get to Kills along the way; Ragnar jargon for passing runners. At this point Kills were more picking off the young, elderly or sickly than they were dragon slaying but I'm still taking credit for them). As the run seemed to never end the temperature soared and my paces crashed to a final of 11:00. I wasn't doing anything to help our estimated finishing time from slipping further.

Our anchor runner slayed the last leg, 7.1 miles in an 8:00 pace to finally bring this thing to a loud and jubilant finish just before 8:00 p.m., almost 37 hours after we started and nearly 3 hours passed our original projections. It was a long couple of days but it was still a total and complete blast. I'm pretty confident there will be CA Cruisers Redux at Ragnar in 2012.

I ended up running into my teammates from last year's Ragnar just before my first leg and kept in touch with them throughout the day via Facebook. It’s a good thing I ran with the CA Cruisers because the team now known as the Commandos finished in about 31 hours. I was clearly not Commandos material this year.
Posted by Darrell at 8:20 PM 3 comments: 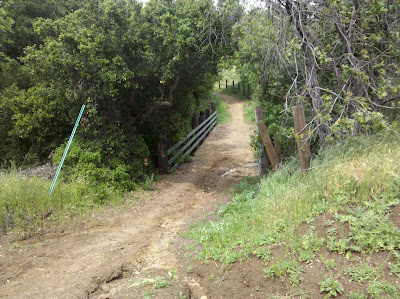 I've run over this bridge countless times in my 7-plus years of running in Bonelli. I always have the same thought as I trip and tramp over the bridge. The Three Billy Goats Gruff. When I was in grade school, for some reason 3rd grade sticks out, we often had a substitute teacher, Mrs. McLaughlin. It was always a good day when we had a substitute especially when we had Mrs. McLaughlin. Mrs McLaughlin was a retired teacher and she a classmate's, Kevin, grandmother. One day to fill the day she told us the story of the Three Billy Goats Gruff. She narrated the story complete with voices for each of the billy goats and of course the troll and with wonderful sound effects of the three goats crossing the bridge. Trip, trap, trip, trap - with a clicking of her tongue. We never tired of hearing her tell the story and begged for her to tell it every time she substituted. I can't recall a time that she didn't regale us with the tale of the goats Gruff. I wish a could draw some profound parallels between Mrs. McLaughlin's Three Billy Goats Gruff and running, but that isn't really my forte. Maybe every time I cross that little bridge on the Bonelli Trail I am outwitting those things that may keep me from my running goals or from running at all. The troll that says I'm too slow or too tired will just have to wait for the next guy to come along. The troll of injury that plays havoc with my body and my mental health. Yesterday I walked the bridge rather than run it because I'm nursing my left leg, but I crossed the bridge none the less. The troll will have to wait for another day. If you are the goat, then keep running and don't let that troll get to you. Maybe from the troll's perspective the lesson is to seize the day. You never really know if something else is going to cross that bridge or if what does cross that bridge is the thing that does you in. If you are the troll, then take advantage of each opportunity to run, enjoy it for what it is, not waiting for something better to come along. Either way, I will always think of Mrs. McLaughlin and the Three Billy Goats Gruff each time I pass that bridge, I'll smile and hear the trip, trap, trip, trap in my mind. I hope to pass over that bridge many more times. In the end it wasn't the troll the won out after all.
Posted by Darrell at 2:55 PM 4 comments: