I met Terry at 7:00 a.m. at the Denny's on corner of Diamond Bar Blvd and Temple Ave. This is the beginning of a 15 mile loop that I call Brian's Loop, since he introduced us to it. It is on large suburban streets with fairly substantial bike lanes most of the way and a nice green belt near the end. The cool thing about this loop is the number of long slow hills. Terry suggested this loop since she is getting ready for the Carlsbad Marathon, which is a rolling course. Terry was planning on going 18 miles. Since I'm doing The New Las Vegas Marathon in less than two weeks I planned to do about 10 miles. Using the GPS feature at sueandpaul.com, I came up with a variation of the loop by bisecting it with Diamond Bar Blvd. The run ended up being just over 11 miles. 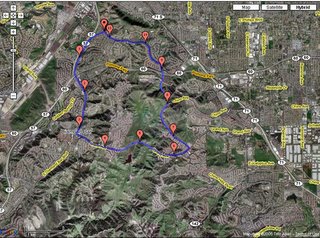 I felt pretty good. I motored up the long hills without any real problem. Terry had suggested a walk break every 15 minutes or so. It never really worked out that way. Usually I waited at the top of the hills for Terry. Our overall pace was maybe a little slower than normal. 1:52 for 11 miles, 10:12 pace. I am happy with the slower pace considering the hills and the upcoming marathon. It is difficult to balance my body's need to rest and recover and my brain's need to keep the mileage up in my log. After Saturday's 8-10 miler, I promise myself to take it very easy next week. The weather was just about perfect for this run. The sky was clear with temperatures in the high 60's.

After the run, I made breakfast for the family, pancakes and bacon . I watched a little to the Macy's Thanksgiving Day Parade. I used to think that this was the lamest parade around with the lipsyncing celebrities. This year the parade seemed a little more special and had a whole new energy having just been in NYC a few weeks ago. In the early afternoon, my family and I went over to my mother-in-law's house for the traditional Thanksgiving dinner. The standard fare and of course enough of it to feed at least twice the number of people that were there. It was sure tasty. I even ate a spoonful of those nasty turnips that she makes every year and no one eats but her.

Throughout the day I realized how much I have to be thankful for and that very little of it is due to my own efforts. Life is good!
Posted by Darrell at 9:18 PM