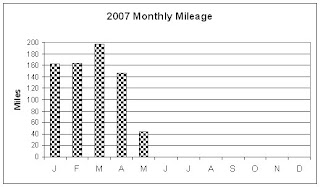 It is a crash that is far less memorable and the effects are far less wide spread than the Crashes of 1929 and 1987, but it was a crash non the less. I feel fortunate that the crash happened now rather than in October as those other crashes did. October would have put a serious crimp into the Marine Corps Marathon.

I ran an easy 3 miler today on the dirt of the equestrian trail in Via Verde. I won't run the next two days in preparation for the Fontana Days Half on Saturday. Today's run concluded my mileage for May 2007. The grand total is: 44.6 miles. This represents my lowest mileage month ever, except of course all those ZERO months the first 42 years of my life. I even ran more than that in January 2006, 49.7 miles, when I spent the first two weeks of the month in India.

I find it a little ironic that two months ago I was celebrating my highest mileage month ever and yet that probably had a lot to do with the current state of my right foot. The bummer part is I didn't even get to cash in on the high mileage at Eugene. I missed my chance to "sell high".

I've been working up my schedule for MCM. I usually do an 18 week buildup to the big day so I don't' officially start training until June 25. I am going to take it pretty easy until then and even then ramp up a little slower than usual depending on how the foot holds up.

The whole ankle/foot is kind of stiff and overall my legs are tighter than usual. During tonight's run I didn't feel anything out of the ordinary. I also continue to ice the foot and I where shoes all the time to keep the arch supported. And as much as I dislike the idea, I'm staying away from Bonelli or other trails to avoid the down hills for awhile.

I feel fortunate that I've had a good long run (pun intended) of 4 years without any major injuries. So now it's a couple of days rest then off to Fontana to complete my So Cal half marathon tour.
Posted by Darrell at 9:05 PM

Darn injuries, so frustrating Darrell!!
Good job on the arch support- keep it up!! Hopefully, our feet will turn the injury-free corner sometime soon.

Definitely know the frustration.... In the long run this little blip won't even be noticeable.

I luv how your injury month is still longer than my "normal" month :-) As much as we hate it, this is all part of what it means to be a runner. You are handling it beautifully.

You are so stubborn. Maybe the low came on because of the high?

Injuries suck but part of the game... u will recover & you have an awesome attitude which is more then half the battle....

Do u roll ur legs with a foam rollar or the TIGER Tail?

I am really getting better at this recovery thing & trying hard to keep my legs fresh...

I roll my legs twice a day 5-10 mins depending with the TIGER TAIL for about the last 2 months...

what a big difference it's made, Highly recommend it!!

That doesn't look like a "Breaking the Tape" chart. I'm telling Jeff ;)

I'm knocking on wood, dude, for staying injury free thus far, and know that you'll be feeling fine soon. So nice to see you at the Saddleback Memorial Half. Thanks for saying hi!!!

Any more ironic that both the Dow and the S&P500 hit all-time highs yesterday?? No, probably not...

Much to learn from injuries. You will benefit from this deeply, Darrell.

An old Arab saying: "All sunshine and no rain is the recipie for a desert."

Smart prep this week for Fontana. Smart thinking about MCM, too.

I'll be three hours ahead of you on Saturday, but only because of the time zones :-)

Cool chart! Hopefully you'll heal up rapidly. Based on what I am reading, I know you'll rebound for MCM.

Sorry you need to stay away from the trails for awhile. : ( Good luck with your upcoming 1/2 and just keep on taking it easy for awhile.

We have a saying in these parts - 'in jig time'...which means 'pretty quick'...that's how long this ankle/foot thing will bug you. You'll be back at it in jig time. Hey, 4 years is a pretty good run.

Sorry to hear that the foot is still bothering you Darrell, hope that it isn't too much of an impact on your upcoming HM.

Run to train. Race to win. The race is in October. You'll make it.

Time to focus on the next training cycle. That's a pretty impressive crash. You might have even topped me.

I've been there and we tend to come out of these spells much stronger - and wiser.