This was the second time I’ve run this race, the first being 2005.Earlier in the week Matt had posted about this race’s connection to M*A*S*H. I actually did see the Jeep this time around; I don’t remember seeing it the first time. I was looking forward to this race for several reason; I really enjoy being off road, I was hoping to better my time from 2005 (2:24) and I was going to get a chance to see Jessica and Matt in person. (thanks to Jessica for the photo of Matt and me) 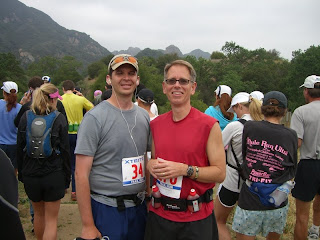 I did see both of them at the registration area a few minutes before the race started. Matt and I were doing the 14 miler (Matt had already run 13 miles on his own) and Jessica was doing the 4 mile option.

Just before the Jeep the race goes through about a mile of single track. Last time I spent considerable effect overtaking and passing people in this area. This year I just fell in behind a few people and ran conservatively. I knew that once we hit Bulldog, a wide fire road, there would be plenty of opportunities to pass.

One of my pet peeves about running up and down hills in a race is all the people that I pass on the way up that just barrel past me on the way down. The negative side of me thinks “anybody” can do that, why don’t they tough it out and run UP the hill as well. In theory I’m not opposed to walking, it is the perfect strategy for an ultra or someone that isn’t a strong hill runner. I guess it’s just my stubborn pride that makes me want to run up the hill as well, even though at times I realize I’m not “running” all that much faster than some people are walking. I also think that if we are all on the same hill at the same time that they must be at least as strong a hill runner as I, so why not run? For me the race is always lost on the downhill since I’m not a very good downhill runner in the first place. So who am I really frustrated with?

I’ve mentioned my right foot hurting lately. Because of that I took most of this last week off. I was a little concerned about how my foot would hold up on the trails at Malibu Creek. At the start of the race, the foot ached a little but then gave me no problems on the climb up. Unfortunately on the first few short down hills I could tell things were not going to be good. The three mile climb up Bulldog from mile 3 to 6 is followed later by a nearly equivalent continuous down hill from mile 9 to 12. By mile 9 my foot was pretty uncomfortable. I even felt like things were moving around in there, things that weren’t supposed to be moving. Each step down was pretty tentative. I was reduced to nearly a walk on the down hill, I sure got passed a lot this time. The occasional uphill section offered some relief.

During a run my head gets filled with all kinds of random thoughts. A lot of those thoughts make it here; many of them are left behind on the trail. During those painful miles I started to question why had I signed up for a trail race knowing the condition of my foot – not very smart. Why did I insist on running the race – just plain stubborn. For some reason the M*A*S*H theme song popped into my head – Suicide is painless.

It wasn’t really painless but I thought I had probably just committed the equivalent of running suicide, jeopardizing at least the near future. I was sure that I was doing damage that I hadn’t really needed to do, but I keep moving forward. With each painful step down hill I saw my 2:10 goal disappear, then 2:24, then even 2:30. After the long descent there is one final hill that seems bigger than it really is because of its placement at mile 13. That hill is a demoralizer, but I was looking forward to something other than down hill. Just to keep the negative thought train going here, I thought “this trail sucks, I suck!” And finally at 2:37:55 it was over.

Thankfully I have a short memory and after having some food and chatting with Jessica at the finish line, I was back to my normal self. My foot ached, but walking was not that uncomfortable. After Jess left I decided to walk back out the road about ¼ miles to the end of the trail and wait for Matt to come in. He was about 30 minutes behind his projected time, but was still upbeat. I walked that final stretch with him. He grabbed some food and we sat, talked and cheered the half dozen or so people that finished later. I probably mentioned my foot about a hundred times during that hour, sorry Matt. Matt is such a laid back guy, it was good to spend some time with him.

Many people, especially my wife, have suggested to me that I have a doctor check out my foot. I’m not much for visiting the health care professional. I pretty much subscribe to the “ignorance is bliss” school of medical prevention. It’s that whole stubborn, stupid thing.

After being home and bare foot for a couple of hours my foot ached pretty badly. I had some errands to run so I decided to wear my running shoes for the best support. I kept them on the remainder of the day and things felt better, sore, but better.

Tomorrow morning I will make a doctor’s appointment. If I don’t’ I’m going to need more than my foot looked at (right, Lisa?). Today my quads are sore, but it’s the good kind of sore that I enjoy. I will live to run another day, I just don’t know when right now.

Through early morning fog I see
visions of the things to be
the pains that are withheld for me
I realize and I can see...

That suicide is painless
it brings on many changes
and I can take or leave it if I please.

"Suicide is Painless"
Music by Johnny Mandel
Lyrics by Mike Altman
Posted by Darrell at 1:13 PM

I'm sorry you didn't reach your desired time, and that negative thinking can be a bitch, i bet it stems from your foot bothering you, which if it put you out all last week I think it IS time to call the dr. Congrats on your finish, despite the kinks it is something to be proud of :)


P.S. How bout a marathon in South Carolina in October?

Dr. Pagliano in Long Beach :) It was great to see you Darrell. I hope you get your foot issue figured out and get back on your feet soon!

Don't you hate it when you know you should have taken better care of yourself? Drives me nuts when the chassis gets loose like that, so to speak.

good luck with your foot. (mine's currently wrapped up until wednesday, so i can commiserate.)

Glad to see you updated that blog title!

It's a bummer when the negative spiral starts during a run, and even more when it's caused by pain. I'm like you - the finish, a little food, a little drink, some good friends and things start looking up.

Good luck with that foot!

I hope your foot gets better.

I'm not fond of running down steep hills either. I hate that out of control feeling.

Once you have a body part screaming at you in protest, goals become meaningless :-) And we all know that that negative BS is just BS :-) You will never suck, dude! LOL. I'm glad that you are going to get it checked out! Won't hurt, and definitely may help.

Journey to a Centum said...

Dude - Get that foot checked out! You don't want to keep hammering on something like a stress fracture. If it's something else perhaps some orthotics will help. Spenco or Superfeet might do the trick! Cheers!

Darrell,
Glad to hear you are going to see a doc for the foot!! Same deal with me a couple months ago...foot pain reared its ugly head on a downhill section of road. Not good!

Hope the doc has you on the mend soon!

I've ignored various foot problems and lived to talk about it, but I don't know if I'd recommend that course of action.

I had to laugh at your comments about passing people on the way up only to get passed on the way down. Running fast down hill really pounds away on your quads. Since I am unwilling to work on strength training, I'm always getting passed on the down hills.

i was really bummed when you told me how much it was hurting, Darrell. There is just too much downhill at the course for the last several miles. I will be sending you good thoughts, buddy. I will hope for good news from the doctor.

Thanks again for the great chat at the race and for waiting around for ultimate slow-poke :)

Maybe Hawkeye should be checking for an incoming helicopter for you :-)

Sure hope you figure out the foot deal. I'm not surprised you felt better with your shoes on...much better support.

Yes, get the foot looked at. It may set you back some time (and money) right now, but you've got 40 more marathons to go, right? You need to stay in condition for the long haul.

I think your problem is with yourself. Start working on those downhills and make sure that once you get ahead by being a strong hill runner then you can keep your placement and not let anyone pass you on the downhill. What worked for me was to completely thrash my quads on the downhills week after week until they became conditioned for the pounding. Also, have no fear of complete wipeout.

Sounds like fun nonetheless. I know you didn't really mean those nasty thoughts about the trail and you sucking.

I hope your foot is a lot better by now! Did you make that appointment? : ) I'm still working on the downhills too. Tucking your chin and lowering your center of gravity helps get you in the right groove.

oh no - hope you figure out what's up with the foot!

Yikes, Darrell. What a bummer song to have run through your head. It doesn't even have an upbeat tempo! Sounds like all things considered, you had a good time. Take it easy.