Past, Present and Future

Past:
Here's a summary of the results from Eugene as posted at onlineraceresults.com

I'm amazed at all the number 44's in my placing and that I wasn't very far off the mark when I hit the half way point. The photos are up at ASI. Check me out on the way to the finish. Lisa said I was leaning way to the left and looked like I was about to fall over. This picture (-035) shows that pretty clearly. 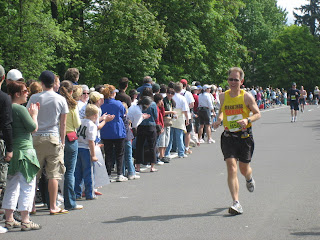 This is the picture she took of me on the way to the finish line, not looking too bad there.
Another interesting story about the marathon that I forgot to relate. Just as we were about to board the flight home I notice a guy sitting across and down in the waiting room wearing the fluorescent yellow Maniac jacket. I approached him and asked him the obvious question and yes he had. He was Maniac #184, Eddie Hahn. It turns out his seat on the plane was just across the aisle from mine and he regaled me with marathon stories the whole way home. It sure made the trip home go really quickly. Eddie has run a lot of marathons all over the world, thanks to his 20 years in the Army, including 27 states.

Past (Part 2):
I can't let a month go by without updating the mileage stats. I ran 146.6 miles in April, my lowest total so far in 2007. April would have been the lowest mileage month accounting for the taper but the cold just made it a little bit lower. The week of the marathon the only miles I ran was the marathon itself. I've still got some miles in the bank if I want to complete the 2007 in 2007.

Present:
This week was a recovery week. I almost always take off after a marathon until the following Saturday. This time I really didn't have much choice, the cold had me pretty wiped out all week. I was able to get over to Bonelli on Saturday morning. The weather was very much like the weather the prior weekend in Eugene, partly sunny in the 50-60 degree range. I ran the trails around the perimeter of the park for 9 miles. I took it nice and easy. Right from the get go my right foot hurt. It hurts across the top on the inside below my ankle, the navicular bone, based on my web search. It has hurt off and on for awhile now. It hurt from the get go at Eugene as well. I was hoping that after a week off it would feel better. It is especially sore on the down hills. My calves were also in knots most of this run. Later in the day I was pretty spent.
Miles for the week: 9
M: 0
T: 0
W:0
H:0
F:0
S: 9 miles, 1:35:17 (10:35 pace)
S: 0
This weeks numbers make last week look like a high mileage week!
Future:
Earlier in the week I firmed up some plans for a couple of local races. I signed up for the Malibu Creek Trail Challenge. I ran this race in 2005. I missed it last year because it fell on the same day as race #2 in the 5k series. My original goal was to surpass my 2005 time. Now I'm a little worried about the foot instead.
I also signed up for the Fontana Days Half Marathon. This will be my third running of this event on June 2.
Our family usually goes camping over Memorial Day weekend with a group from church. This year they way things fell together we didn't get a spot, which turns out to be a good thing because we are invited to a wedding on Sunday the day before Memorial Day. We may spend a couple of days sharing a site with some other families. All this means I will be home on Memorial Day for the first time since I began running. The Saddleback Memorial Half Marathon is run on Monday. I've wanted to do this race and now I have a chance. The cool thing is the two races, Fontana and Saddleback are only 5 days apart. Many people run both. I think it will be fun.
Tyler wants me to find another 5k for us to do. That's a request I will be happy to take care of.
Still no definitive marathon plans, but I will be looking. Wherever I go will likely be without Lisa, so all I have to do is find a state she has no interest in. How hard could that be? Marine Corps registration opens this coming week and Rocket City with Joe and Wes seems darn inviting. I've doubled my number of states in the year and a half that this blog has been on-line, so I've got to keep the momentum rolling. With 40 more to go, I'm looking at a good 10-15 years before I'm done.
Posted by Darrell at 8:36 PM

woot! you're going to run saddleback! depending on what happens with tc, i may run, or i may just come out and support. either way, i'll see you there!

and congrats on your great time in eugene!

All my official pics are horrible. I didn't notice a photographer which probably explains why. : )

Smart of you to take an easy week with your cold. I hope the foot pain goes away soon!

Firming up some plans for the future sounds good. You got to love the 5K distance :-) Hope you get to feeling better, especially the foot!!

These don't add up... are the other 2 wheelchair people? Just trying to get you that extra 0.01% higher in the standings!

These don't add up... are the other 2 wheelchair people? Just trying to get you that extra 0.01% higher in the standings!

Great report! I didn't know there was a photographer. I'll have to look it up! Great finish. I was 44th in my age group too!
Jenny

baby that ankle. no need for setbacks.

I'm concerned for your ankle. Pay attention to it...that's the base of everything.

We'll both be running halfs on June 2...I'm betting your time to be better!!! Notre Dame Stadium vs Fontana, California. Hmmmmmmm.

When I ran the Mini on Saturday, I saw a fan on the side with a Rocket City Marathon shirt on...I stopped to talk to him...cool!